The S&P Hits a New High 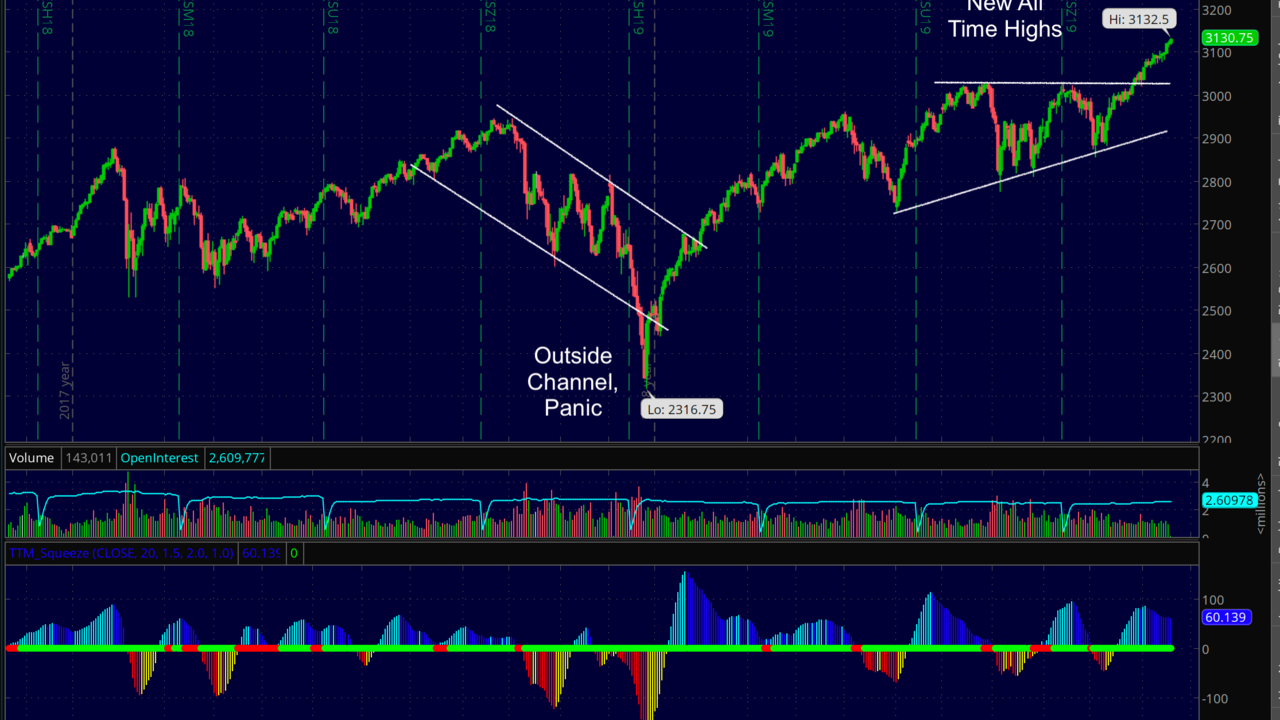 With the market having moved to new all-time highs, I thought it was a good time to review and share some of my research from this summer. Although the path out of the December low has surprised many, there were lots of reasons to be constructive and optimistic throughout the move.

This dovetails well with my broader melt-up call ("The Melt Up") in 2017. The larger takeaway from my work, I'd argue, is bucking the crowd through experience and avoiding the constant market crash rhetoric by looking at markets holistically.

In 2017, the melt-up call was a combination of market internals and Fed policy, while the 2019 grind higher was much more about price action and valuations coming out of a material low (December 2018). Each situation is different, but under the surface involves similar techniques (breadth, sentiment, trend, etc.).

Today I thought I would walk through a few concepts that were helpful over the last year as the market rallied to new highs (chart below). Hopefully, readers will find techniques that they can apply to all markets going forward. I will end with some of my real time comments from the summer.

Past Markets and the 200-Week Moving Average

During the December 2018 low, a look at past market experiences did show historically strong support at the 200-week ma, particularly during bull markets. Further, when this is combined with volatility, the forward returns highly skew to the upside.

I posted this S&P 500 (SPY) chart in real time but more importantly have been discussing the importance of the 200-week MA from the extended 2018 high to the 2019 low as this is where larger money often operates. 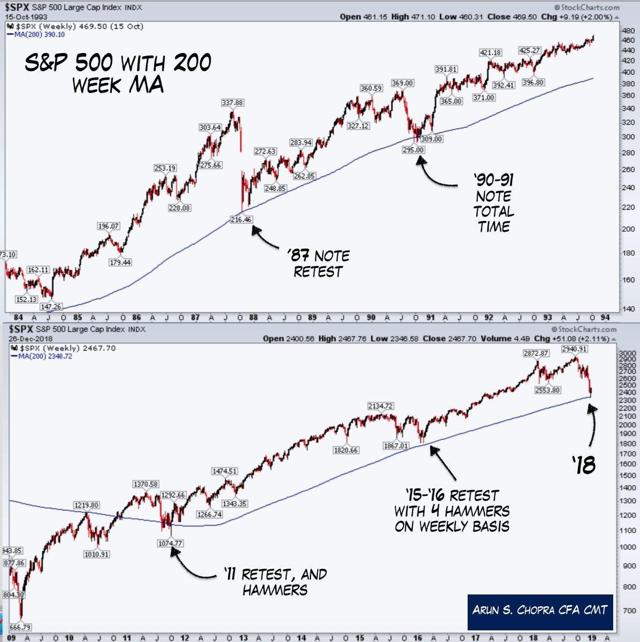 In addition to the weekly moving average test, the market also had a dramatic oversold reading in December 2019. Although I don't disclose the breadth measure below, it is essentially a modified measure of new highs and new lows. For non technicians, this is essentially a measure of internals. Internals can range from healthy to weak, to extreme on either end.

The key point being the level in December in 2018 was the second-lowest on record, second only to the financial crisis. This made it extremely weak and therefore a contrarian signal. Such a low reading suggested the low would be durable, and we knew this data by the first week in January of 2019. 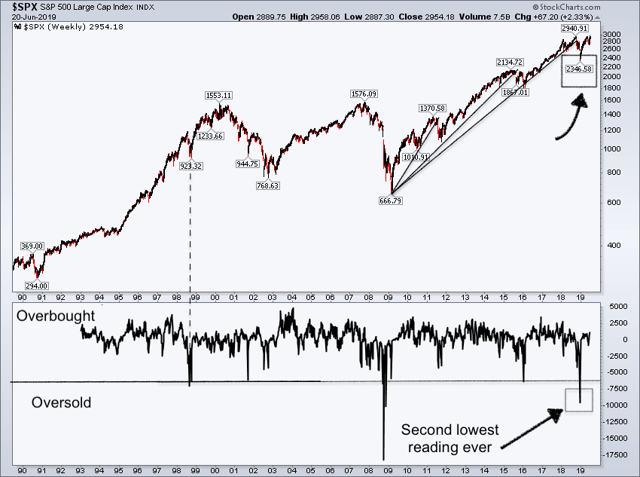 Sentiment was perhaps the most important aspect of the entire move off the December 2018 low. Often called 'recency bias,' where we often tend to focus on the more recent events, the move out of the December low was one of the most unusual in terms of instant pessimism.

Any and every pullback was met with extreme levels of bearishness. Each reading highlighted below registered well above a +1.5 standard deviation in bearish sentiment. I posted this more recently but all year long I discussed in real time with members how these sharp 6%+ declines were getting irrationally bearish, particularly after such a steep decline in the prior December.

The key takeaway is we had 4 bear readings in the last year at levels we usually only see once every two years or so. I partly attribute this to the misinformation the internet tends to provide. 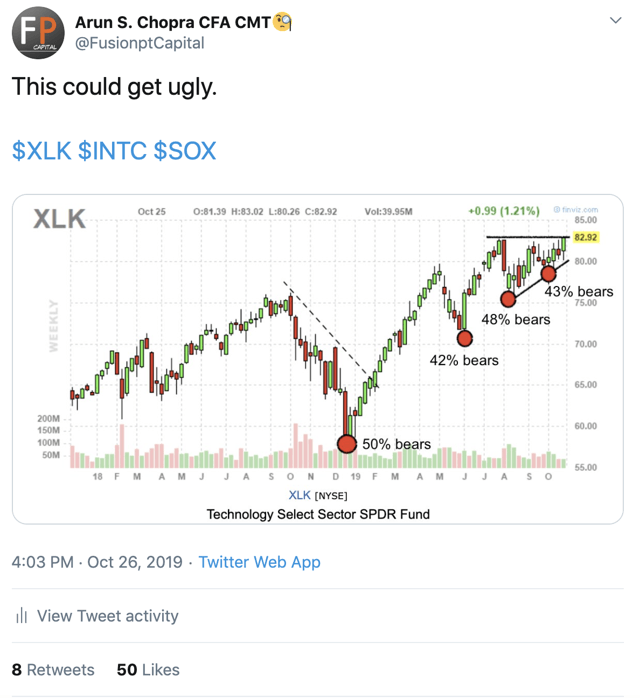 As we came out of the low, there also was a lot of discussion of Fed cuts and how they simply couldn't cut with the markets bouncing and moving towards new highs. Another one of those more common, less validated statements.

A look at 1995 below shows not only did the Fed cut at all-time highs, but they did so after a 30% run, specifically citing not wanting to upset markets. 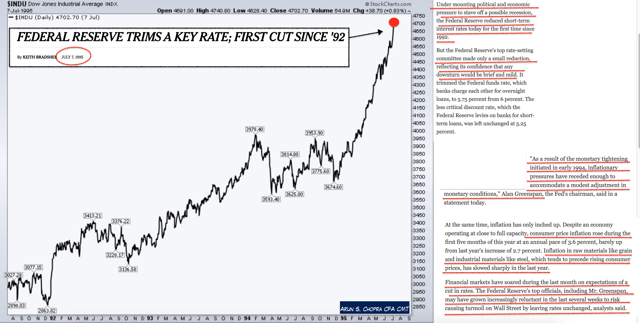 For more detailed longer-term participants I'd note not only was this move by Greenspan a longer term disaster, it was likely more related to protecting the yield curve which had collapsed a year prior in 94 to .11 basis points.

I talk a lot about perception, psychology, and behavior in my work. I posted this in March of 2019 so well before the new highs, but the point was simply that people tend to visually think inside the context of what they see. In the case of charts that mean whatever is 'inside the box.'

The takeaway here is we often think the chart is capped just because the screen stops. 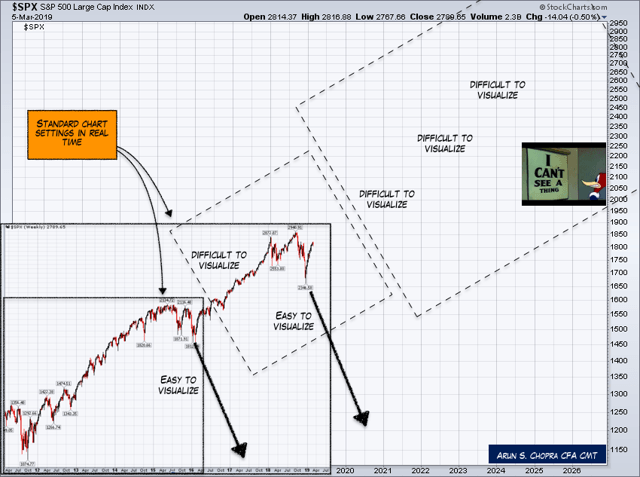 I further highlighted that point with the following post on JPMorgan Chase & Co. (JPM). Although this is a technical chart and slightly tongue-in-cheek, the behavioral aspect is the same as the above. Our minds are impacted by the lack of 'room' on the chart (JPM has since broken out and moved to 130 as of this writing). 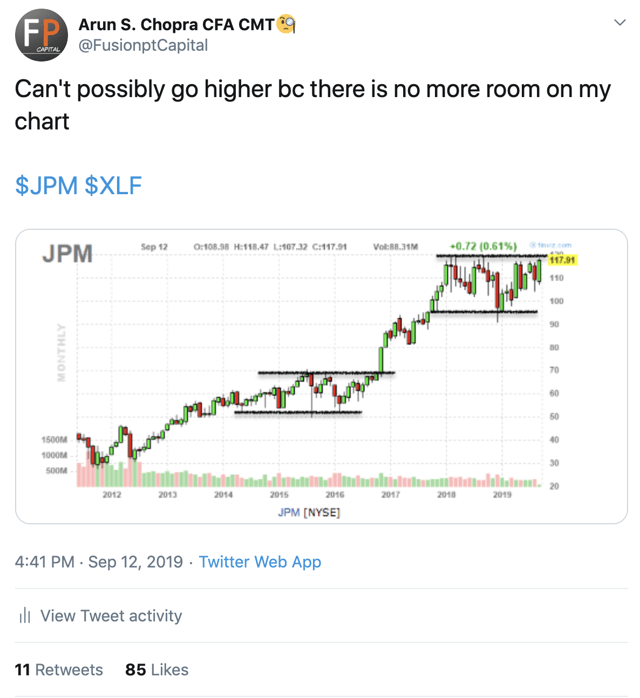 Lastly my comments. This was from one of my summer videos for members. The key point I am making here is that markets can and often do break through former highs. Nothing in the last year has been out of the norm; if anything, it's been in line with prior experiences.

Narratives are everywhere but I continue to urge staying open-minded and balanced amongst disciplines. Each approach has its own benefits, and knowing when and how to combine them is critical to managing noisy markets.

Hopefully by seeing some of what I was looking at over the last year, readers can see there is more to markets than the current headlines, including price, breadth, internals, past history, trend, and of course fundamentals.

Performance continues to outperform at Fusion Point. I continue to look for opportunities utilizing fundamentals, technicals, and behavioral finance.