The Move to Safety

Today's post is a quick update to my market communication over the last month or so and highlight my shift to safety as the year began. Today will be brief as there is much work to do for myself and members this weekend. I did want to update this in a timely fashion however particularly for followers and those new to my work. I did not predict the crash, but I did derisk in front of it using a more sustainable approach.

The first section is some general thoughts and my posts about twitter and trading in case you haven't seen them, the second section is the what I said and when I said it stuff.

I noticed Keith McCullough posted the following this week and I couldn't agree more. More on that in the second section.

Who are your market sources? What were they saying 2 weeks ago? How about 1 month ago?

With markets falling back to basically January 2018 levels this seems more than appropriate. Such a large and quick drop like this seems like a good moment to review how I work in general.

As an active trader it's hard to understate the need for a comprehensive approach to trading trend and risk management. There are many flaws to providing advice via twitter, one being that often people only see what is in their thread and not the whole picture.

2 professionals with own capital at risk daily, successfully navigating bull trend AND publicly moving to caution pre last 3 days = ridicule on their thread.

Northman effectively saying I told you so = 500 likes.

Another big issue I see is that twitter seems to be hyper-focused on crash calling vs sustainable approaches to asset management, including trading.

Some steps to becoming a profitable trader

5-More often than not, trade the opposite of the logical conclusion

The Move To Safety in January

My move to safety began towards the end of December and into January as the Algo fired numerous times on the upside (bearish signals) but also the lack of inter market confirmation.

Having been through both bear markets and now 3 mega bulls (90's, the gold market in the 2000's, and equities now) I am well aware of how things trend, boom, and bust.

Sitting around waiting for one or the other, bickering about the past, or pretending my view is bigger than the markets is not my game. Further if you do follow me, recognize that any approach must be right for you first and foremost.

What I do comes with nearly 24/7 market knowledge AND numerous tools built over a decade trading. And even then it is not easy. Following my twitter feed (or anyones) here and there won't get the job done. In fact, when I learned, twitter thankfully didn't even exist.

I did quietly communicate some bearish ideas on my public thread as you can see below with the semiconductors. By 'borrow a pair of socks', I am saying, can I borrow the SOX or in other words, short the space. This was on January 24th, literally the day of the top as of now.

From an active trading standpoint, it does appear now as though the algo has caught both the material lows and top in the semiconductors. 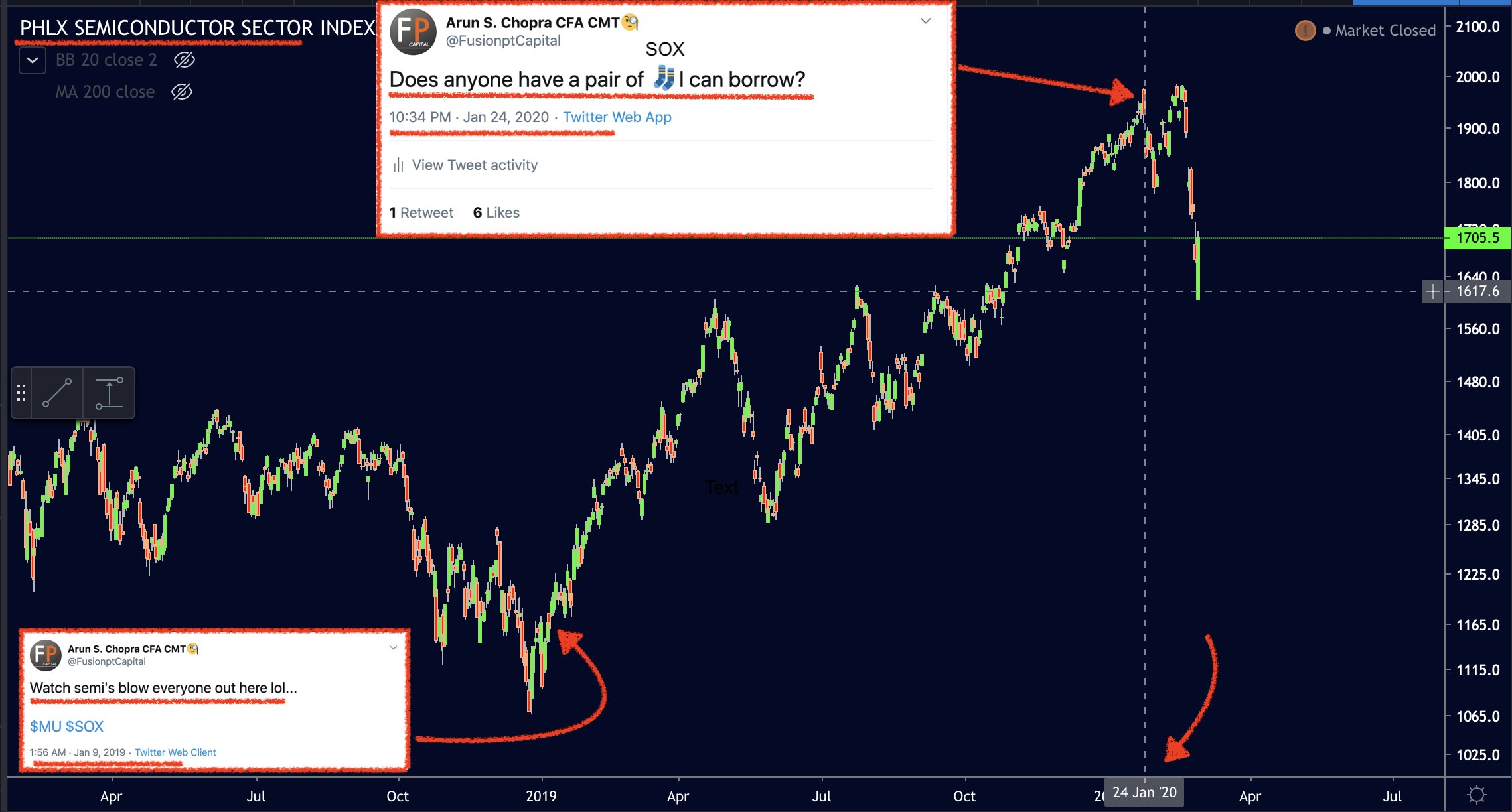 More importantly however, I send out emails to members and videos on what I am doing and seeing. This is where my primary risk off communication was. Below is the TLT email that I sent out as I shifted to a more defensive stance. The related video is below. 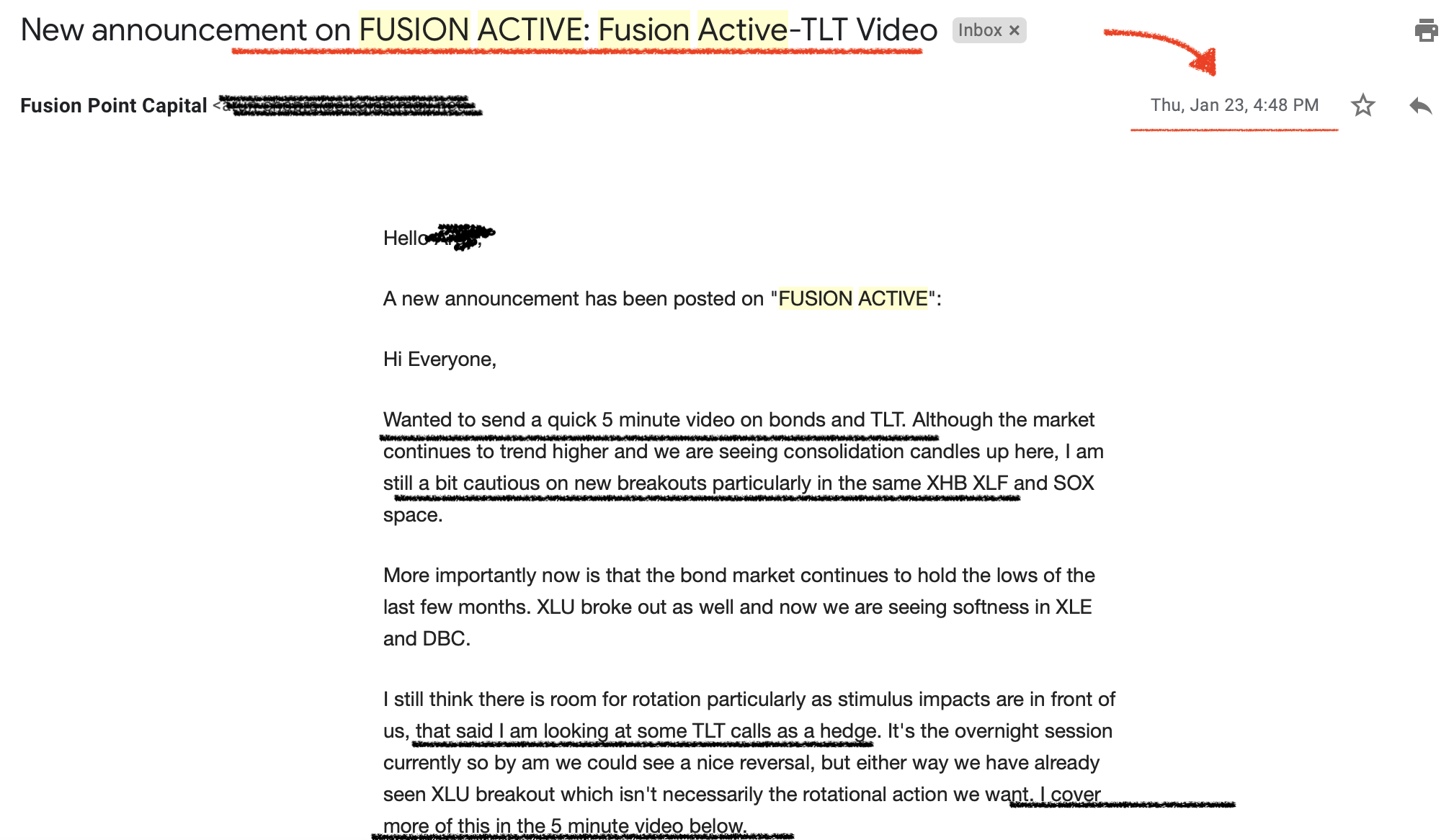 The video below is from January, about exactly 1 month ago and shows what I said with respect to market risk, and why I was hedging with TLT options.

It's really important to understand that I did not predict the 'crash', nor did I attempt to. That is a fools errand and we've seen many who predicted crashes nearly weekly, pretend they somehow called something.

What I did recognize is we weren't seeing confirmation in my overall rotational bull thesis, the market had rallied sharply, shorts had covered, and my algo had fired in key spaces suggesting stocks were being distributed.

Ok that's all for now, I do have some charts I will add to this from the last few months that can hopefully help readers thing about market extension and risk overall. The Algo is also a standalone product now, and I will be doing a large review of volatility events later this weekend for Fusion Active members.

It is very important to understand my private work comes before public posts, although I am happy to share what I am seeing and doing in real time for those who are a part of Fusion Point.