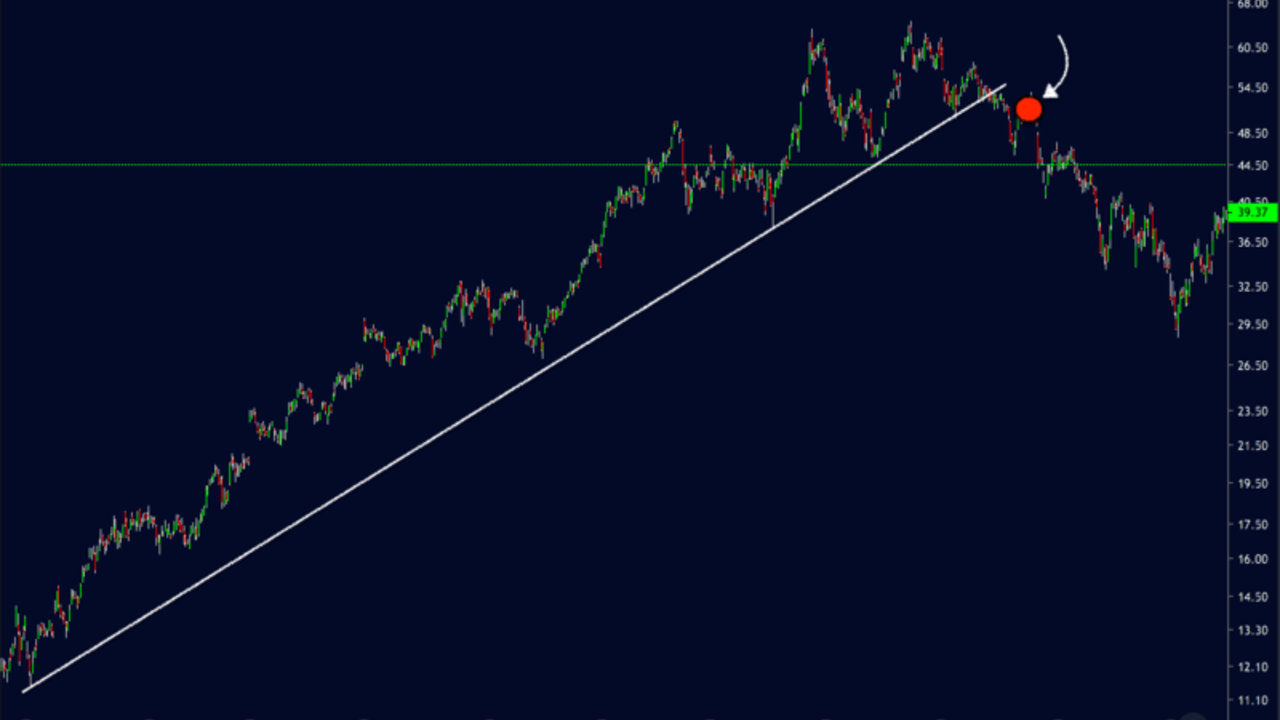 Every now and then there's a trade that really opens up an opportunity for a conversation about fundamentals, price action, and behavioral finance. Turns out Micron (MU) was just that stock in 2018.

I am sure Micron is big favorite here at Seeking Alpha. It has all the parameters I assume the bulk of readers care about. Strong cash flows, demand as far as the eye can see, large cash position, a PE of under 5.

But that didn't stop the stock from dropping 40%. In fact it dropped significantly more than the market, and almost as much as high flyers such as Netflix (NFLX) and Nvidia (NVDA).

Today I want to provide a different view on the stock rather than the traditional deep value, fundamental can't lose bet.

Now, many are going to say the decline is due to China, or DRAM pricing, or any other host of fundamental concepts. That's all fine and good, but it's still after the fact. If you are looking to see how I called the top in a very market driven, logical fashion that goes beyond the numbers and headline news, read on.

It all began on August 28th, when I posted the following very simple technical break in trend. Now, here's where the fundamental only crowd who did hang around will probably start throwing their hands up in the air. Take a deep breath, and carry on. 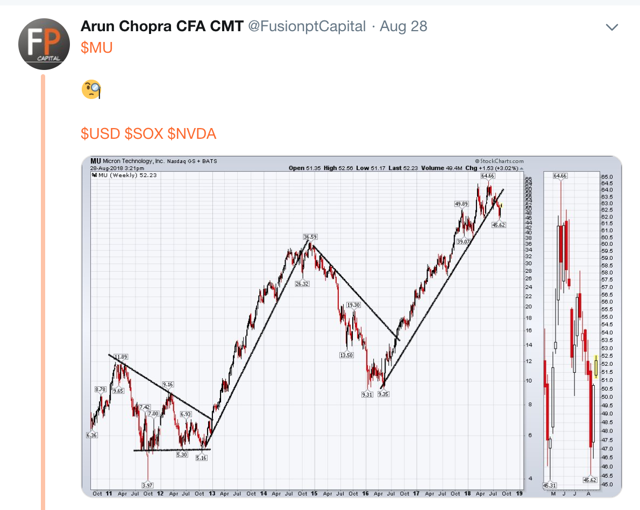 At the time it wasn't just the trend break that was a problem for the stock. Readers of my work know charts are just conditions and often secondary inputs. We need more to come together, including fundamentals (more later). In Microns case, while the longer term trend was breaking, we were also seeing a major break in some key intra-market drivers for the stock.

Intra-market drivers are effectively fundamental in their very nature, even if we express them through charts. What we are looking for are correlated assets whose businesses help drive the company in question.

On August 30th I posted the following comparison chart, looking at the ETF CARZ (The NASDAQ Global Auto ETF) vs MU. I joked at the time I'd let 'the superstars' figure it out because everyone seemed to be oblivious to the break in a very key index related to Micron's future business. 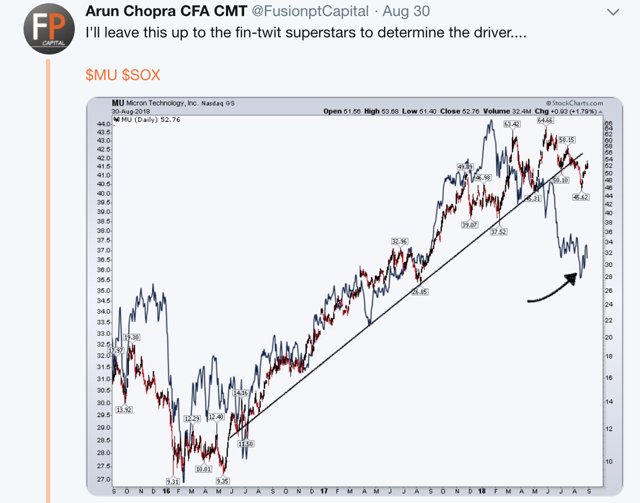 Now, is it China or trade related that CARZ took a dive? Probably. Sure. But the market moved in advance of the stock, so what difference does it make? This is the reason I monitor price and intra-market as part of my inputs.

A few days later on September 4th, I followed up saying that Micron was the most fundamental vs technical stock in the market at the time. That's because by this point it was clear the trend was broken, and the intra-market was diverging, while fundamental only investors continued to claim the PE was still 5, and it was a sure shot. 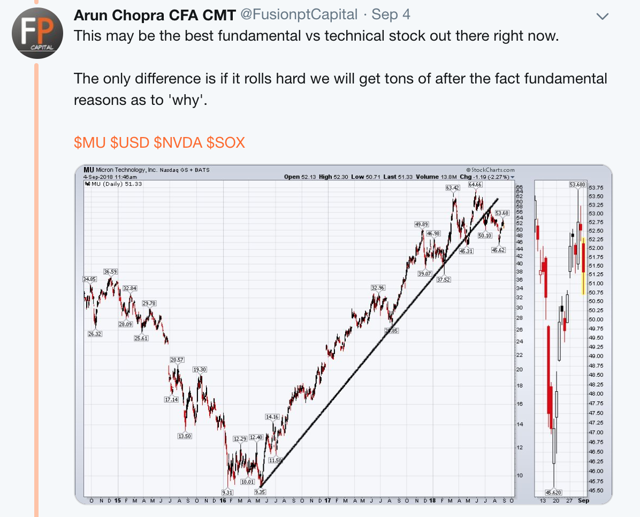 About a week later on the September 13th, David Tepper jumped in the ring reiterating his position. Clearly no one can compete with a Tepper, who has made incredible returns and calls (2011 low etc).

That said, I was emboldened on the short side when I saw his reasoning (see smart cars comment). I thought to myself, fine, maybe for the long run, but near term this thing is going to get pasted, again because the intra-market (CARZ) was screaming for those willing to listen. 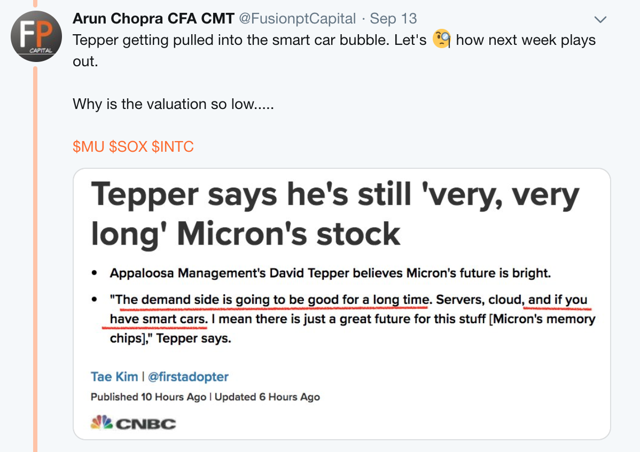 And sure enough on the September 20th MU beat, but guided lower Q/Q. I joked at that time about who could have seen this coming. 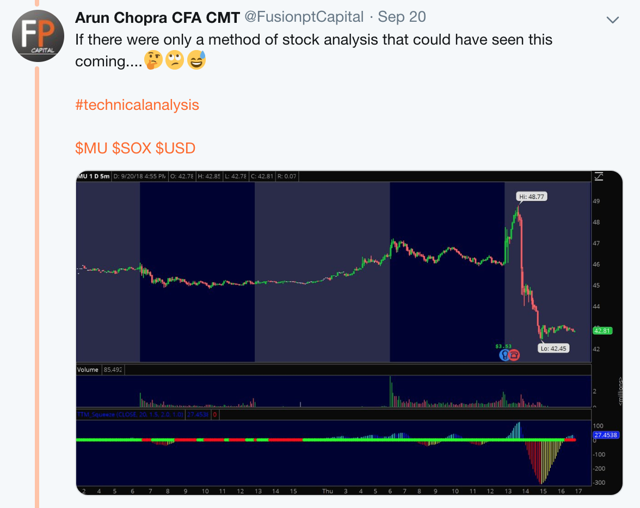 Now let's look under the hood a bit as charts and price action is hardly the end all be all.

The stock was cheap, right? Well, no, not really. On a P/S basis, looking back over the last 10 years or so, Micron was actually at an all time high at 60 bucks. What is ironic here is many 'value' investors (or broad market bears in general) often discuss the the elevated price to sales across the market (near 2X sales), but somehow Micron was cheap because of the PE. If anything, Micron was reflecting the same overvaluation on a price to sales basis in relative terms as the overall market.

On a bottom line basis, a big mistake here was to take the more recent profitability data and concluded a low multiple. Although I am willing to accept the less cyclical argument, at the end of the day the end customer in at least part of the growth business (and where we saw divergences) is cyclical (autos).

A good workaround is to normalize profitability utilizing longer term median data (which technically you can adjust based on your views of the change in cyclicality, if any). The chart below looks both the near term operating margins, and my chosen 5 year median.

When you apply the 5 median operating margin value of 18% vs the ttm of 49% you get a ttm net income number of ~5B vs the 14B the ~5X PE was based on. So even without China, trade, and DRAM on the decline, just adjusting for 'some' historic cyclicality, Micron was also trading at a double digit PE (on top of the P/S).

The next logical step would be to compare this median adjusted PE to the historical high and low, which is outside the scope of today, but is a good exercise when things seem too good to be true.

Let's go beyond the charts and general valuation, and look at some behavioral driven signals. This section will show some of the less 'quantifiable', but significantly more powerful components of the capital markets.

One of the largest areas of my work involves the concept of capitulation. This is when markets blow out on the upside and the downside. Effectively it is a blow-off, and can be fear driven (selling) or greed (buying). To me this is the most powerful, and relevant part of capital markets (much more so than chart patterns or standard valuation models).

Although slightly off topic, here is a good example of four large downside capitulatory events in the last few years (note they are macro, but this behavioral is found across markets). The point is that when the crowd is all in agreement, and then acts, the market often reverse (again, this can be on the upside, or the downside). This makes sense because everyone is now 'in' the trade or investment, and it can no longer go any further (priced in essentially).

Importantly, we can measure this concept through a variety of ways (see volume in these examples). 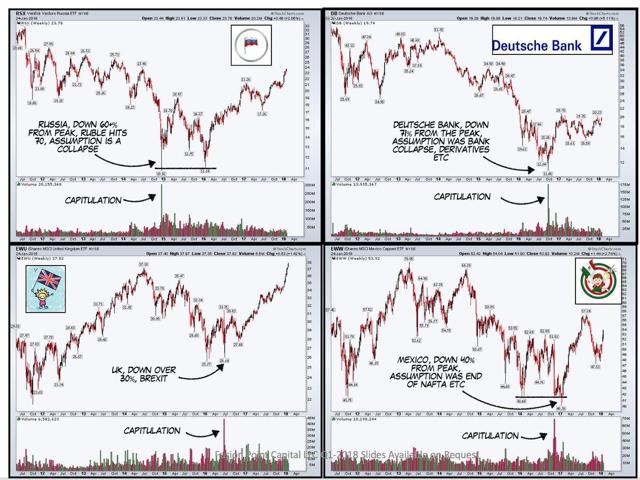 Getting back to Micron, the following is a proprietary buy/sell pressure indicator designed to measure just these very occurrences of buying and selling panics, but not using volume, and being applicable across ETF's and single stocks. Looking at Micron, you can see after a historic run (point 1), the move to 60 saw the highest buying pressure in the history of the company (point 2). Post the retest (double top-point 3) the market rolled over. This was probably the most important input to my bearishness. I knew ownership had changed hands in the 60's to retail, under a completely false argument (5X PE etc). 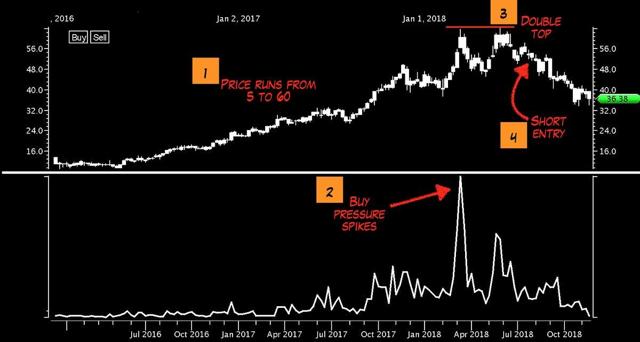 Lets sum up how I timed the Micron trade..

Markets are difficult and there is no one size fits all. As a CFA Charterholder I can appreciate the fundamental view of the world. Having experienced two gut-wrenching bear markets, I know the importance of tangibility. That said, having experienced 3 unbelievable bull markets as well, I know value goes well beyond the raw numbers (and charts).

Below is a chart for the more skeptical for as food for thought. As a Chartered Market Technician, I try to inform others that technical analysis is not just, or really even, about price charts. It's about getting a read on what the market is telling us before it is public.

To that end, here is a look at Micron with DRAM prices as an overlay. You can clearly see the market topped well in advance of the DRAM turn. This is not an accident. Although no one ultimately knows when DRAM will bottom, for my work it's clear it will show up in Micron's stock price action before it does in practice. 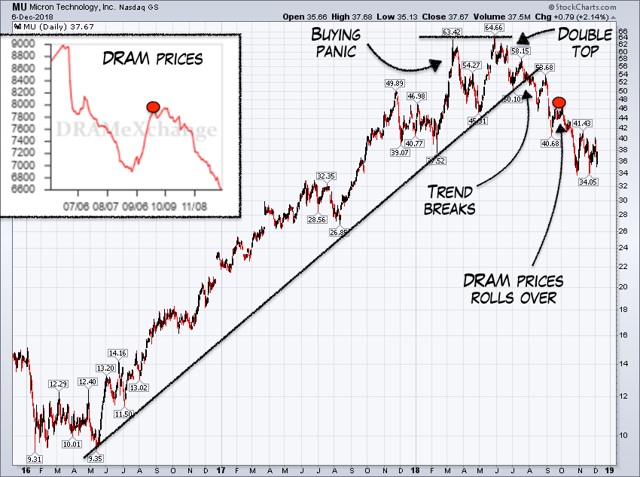 Fundamentally for the bulls (because I also expect to see plenty of, 'tons of cash, large buyback, future demand stuff'), yes, the stock has been derisked. There is no question from a current valuation standpoint (but not trend).

Again, outside the scope of today but the free cash flow yield is hitting 20% (see Tepper bottom at 35%) while the price to book is heading into the lower quartile. Although the upper panel is too volatile, and needs similar adjustments made to operating margins above, the lower panel is a better baseline for a cyclical name, particularly in a technical downtrend.

Where does it end? Well, this brings me to my favorite conversation, the bigger issue of valuation itself. The variability of valuations are tremendous, making this way to play the game extremely challenging overall. Ultimately you can model a true margin of safety, but one would need to incorporate industry dynamics, steady state margins, and trough valuations. Not impossible, but definitely not as easy as many who lean solely on fundamentals would suggest. 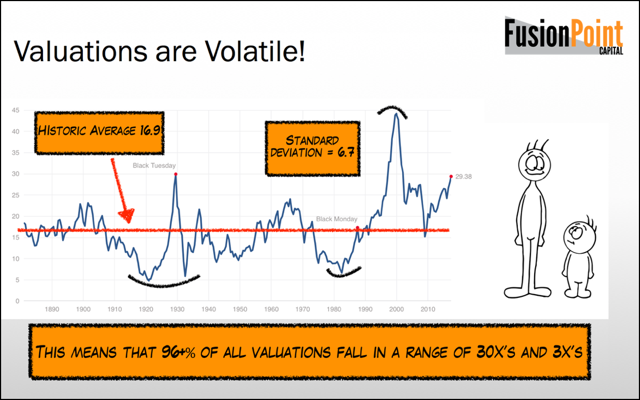