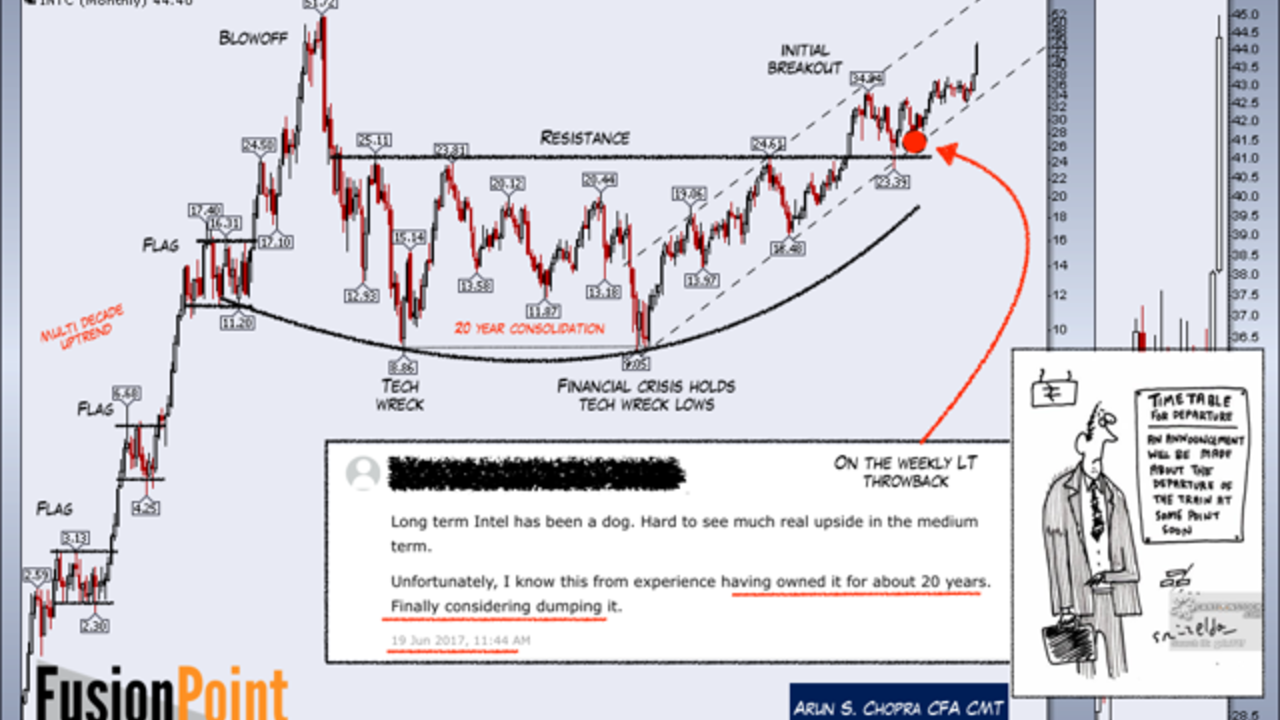 I recently wrote a bit about the differences between the 90s and now in my article 'The 90s Called'. In it I discussed the 4 prior major tops ('29, '74, '00, '07) and the 4 key indicators I follow to warn of a potential top. The equity risk premium is a very common measure of overall valuation and one that I continue to monitor. Generally, we see the ERP go negative in the euphoria phase of a bull. A good argument can be had with respect to if we will see a euphoria phase this time around, but that's outside the scope of this article. What I wanted to do was look at the current market, Intel (NASDAQ:INTC), and how this type of analysis is driving my latest 'Fusion Strategy'.

With the above condition in place, I thought it would be interesting to look at INTC as it recently broke out, and was one of the big names of the 2000 cycle which essentially had gone nowhere for the last decade plus. The chart below shows INTC earnings yield vs. the effective federal funds rate, and the price chart below.

Please note the scales are not exact, but the federal funds rate in 2000 was approximately 6% while INTC's earnings yield was approximately 1.8%, essentially -4.2% ERP. In 2007, we saw the ERP for INTC go negative again, with the earnings yield dropping to approximately 4.8% while the effective Fed rate hit 5.2%. Naturally, a rotation took place in both instances. Today the situation is literally the opposite of the 2000 market, with INTC's earnings yield printing 6.4+% while the effective Fed rate is 1.16%. Note the base in price (lower panel) that was building for the past few years before 2017's breakout. 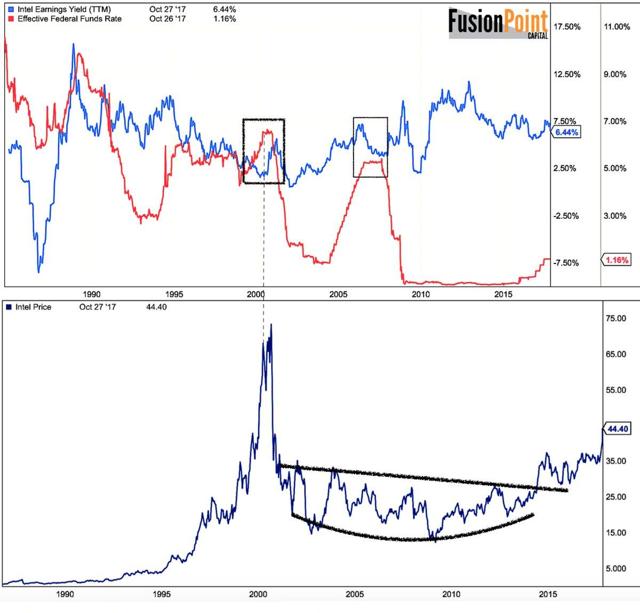 The distinction is important as earnings on an absolute level and relative to the treasury yield is vastly different from other times, especially in 2000. Another way to think of what is driving the Intel's price move is by comparing actual net income to market cap. This reverses the above process to something sometimes more tangible. See in 2000, 9B of net income traded as high as 440B, whereas today another nearly 40%+ income trades for nearly half the market cap. 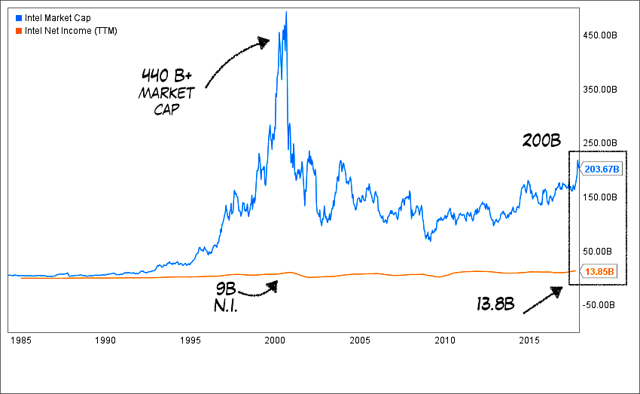 And finally, a look at just the INTC price chart with some behavioral components. Nobody wants another 2008, and with the price action across the markets, it's nearly impossible to ignore the building longer-term risk. Having said that when I ran the above numbers, I was pretty surprised. The pure price chart below shows just how tough markets can be, particularly on our overall emotions. With a nearly 15-year base price has just started to move with a clear breakout, pullback and retest. For pure technicians, this move is being called a major event. For my multidisciplinary approach, it's hard to debate. For those stuck in the name, not as much.

Further if INTC stays bid until the ERP goes negative (again, unclear this will happen again), we will either need to see rates rise dramatically, or all else being equal, the stock significantly higher from here. The math on that isn't worth discussing, however, scenarios could equally include rising earnings with a stagnant Fed rate for the super bullish. 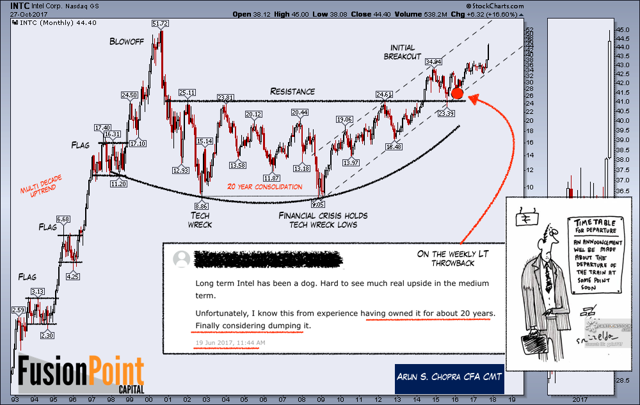 The above is a great example of the design behind one of my newest 'Fusion Strategies', where I capture the above dynamics on both the long and short side of the market.

I will be launching my 'Fusion Trading' service here at Seeking Alpha shortly, where I utilize 8 different 'Fusion Strategies', all designed to capture unique combinations of fundamental factors, technical conditions, and behavioral finance. I look forward to sharing them with readers here, as the above model has already provided some nice moves in four lesser known names, as well as the consistent ideas generated out of the rest of my strategies.